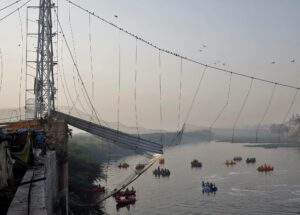 In a town known for wall clocks and ceramic tiles, the colonial-era suspension bridge was the biggest “non-religious” attraction for outsiders and locals

Five days after the ‘Julto Pul’ — the suspension bridge of Morbi — collapsed killing 135 people, the rescuers have left the scene. Residents of Morbi town, however, have continued to flock to the banks of the Machchu river over which the remaining portion of the bridge dangles.

Most are here for memory’s sake. “This was a jewel in Morbi’s crown and our town’s biggest identity. While driving to work today, I felt a void when I couldn’t spot the Julto Pul from the motorable bridge (located at a distance),” said a tiles dealer, Devendra Patel, to explain his visit to the banks of the river.

When the ticket cost was only 50 paise or one rupee sometime in 1996, Patel and his classmates would park their bicycles on one side of river, and use the suspension bridge to walk across to an engineering college on the other side. “It saved us three km. Often, we would be allowed to pass without a fee,” Patel said.

Nearly 25 years later, Patel still would make it to the bridge every few days. “Either it would be my clients, or my children pestering me to accompany them to the bridge,” Patel said.

In a town known for wall clocks and ceramic tiles, the colonial-era suspension bridge was the biggest “non-religious” attraction for outsiders and locals. Many visiting the religious sites would automatically be persuaded by their children to make a quick trip to the swinging bridge.

“If we wanted a selfie, this was the spot. If we wanted an outing, the bridge was the default destination. If it was a holiday, we went here. If relatives visited, we took them to the bridge,” said Kulin Thakur, a local hotelier.

Surrounded by temples, a palace and a dargah — all in a radius of one kilometre — the 233 metre-long and 1.25 metre-wide Julto Pul was inaugurated in 1879 and connected the two parts of the town, Morbi-1 and Morbi-2.

“The then ruler, Waghji Thakor, was fond of bringing beautiful things from his foreign visits. He imported material for the bridge from his visit to Europe,” said Darpan Dave, president of Natya Kala Charitable Trust, that runs a drama museum in Morbi, citing his interaction with his late father and historian, Mahendra Dave, who authored four books on the town and its history.

In one such book, ‘Morbi Ni Asmita’ (Morbi’s glory), Mahendra mentioned about the capacity back then. “The king permitted only 15 persons to cross the bridge at one time. He had a system in place by which never would a single extra person be on the bridge,” Darpan quoted from his father’s book authored in 1973.

“Occasionally, the king would ride his horse across the bridge,” Darpan said.

Before the maintenance and operations of the bridge was handed over to a private firm, Oreva, in 2008, locals would occasionally even be seen riding their motorcycle across it. The Morbi police are yet to determine the bridge’s latest capacity, but investigators have found that around 400 tickets were issued to visitors in the two hours before the fatal collapse.

The bridge was handed over by the royal family to the Morbi municipality in the 1960s. But over the years, the bridge’s popularity and significance in Morbi never diminished.

“I may not visit the bridge as frequently today, but I still have memories of my mother bringing me to here every month or so when I was a child,” said Ritesh Prajapati, a local cab driver. Prajapati remembers diving into the river below: of course at a time when it was much cleaner.

Properties around the bridge always demanded a premium, because of the view of the bridge.

For most visitors, be it locals or outsiders, the joy was in making it swing.

In a town battling dust, the flowing river below and trees and plants on its banks offered a quick getaway to Morbi residents. “Even in an age when mobile phones offer many distractions, my children would still pester me to take them to the bridge. We all felt closer to the nature here,” said Nagma, a local resident.

Locals said the town offered little choice. “In Agra, locals may not visit the Taj Mahal so often. But in Morbi, the bridge was special even for the locals. What else is there to see or do in a dry, dusty place like Morbi,” said Joshi who won’t shift out his paan shop in the hope that the bridge’s popularity and significance will cause it to be rebuilt one day.

But ever since the bridge was thrown open for visitors on October 26, after closing it for restoration in March, rumours abounded among locals.

“The use of metals instead of wooden planks made it harder for the bridge to swing. Visitors spoke about material from China being used in the renovation,” Joshi said, a euphemism for use of poor quality material.

There, however, was enthusiasm among locals when the bridge was reopened – it later emerged that services resumed without the necessary fitness certificate – as they were getting access to the bridge after months.

“On usual weekdays, there are 10-15 people on the bridge in the daytime. During weekends, the crowd swells to 100-150. But since it was the last Sunday of a prolonged holiday, too many people landed here on the fateful day,” said Saif Ibrahim, who lives close to the bridge and learnt to swim in the river below.

Ever since the locals can remember, the bridge has lacked proper management and security, despite being open to the public from 7am to 7pm and tickets being issued from both ends of the bridge. Municipal officials on Monday said that tickets were sold from one end of the bridge and the other end was only used as an exit.

But they viewed it with fondness.

So, after it was thrown open to the public, word spread among locals that Oreva had plans to illuminate the entire bridge and keep it open all night. “We were excited. Our city would look beautiful to our outstation relatives and ceramic clients,” Bharat Parmar, a tiles factory supervisor, said.

No one worried about safety issues.

Visitors usually focused on a large board, near one of the ticket counters, which said in Gujarati that the bridge was a ‘historic and unique heritage’. They often didn’t bother about another board on a subsidiary bridge, leading to the suspension bridge, which carried a “humble appeal”.

Three pointers on that board warned visitors against crowding in the middle of the bridge, advised that life was more important than selfies, and cautioned them from actions that would damage the bridge.

“If a 145-year-old technology sustained so long, we blindly trusted that modern technologies would have been used to make it safer,” said Jayeshbhai Patel, a local businessman who frequently brought his children here.

In the town, there is a sense of bitterness as they see the absence of a site that was, by all accounts, the “identity” of Morbi. They spare no agency to blame for the mishap, which they believe could have been avoided.

“Even a public park has guards. But Oreva didn’t deem it fit to post a couple of security guards. They were just trying to save costs,” said Vasantbhai Prajapati, a 72-year-old local resident.

Others say every agency is to blame. “Shouldn’t the local police be aware and active if the most prominent venue of the district town is overcrowded? Shouldn’t the municipality have checked if the bridge was safe? Couldn’t the Oreva staff notice the unusual crowding? In a small town, no one cares,” said Samir Mehboob, a local whose neighbourhood witnessed four deaths in the mishap.

Rahul Tripathi, superintendent of police, earlier defended the police saying that they received no intimation of overcrowding at the bridge.

A few, however, defend the Oreva owner, Jaysukh Patel, saying he took the responsibility for the bridge as a “social cause”.

“Jaysukh bhai doesn’t need the little money made from the bridge’s ticket sales. That is anyway spent on the staff. Whatever remains, the town knows that it is donated to local gaushalas,” said Devendra Patel.

While Jaysukh Patel is yet to be questioned by the police about the mishap, locals say that the bridge will have to be rebuilt, this way or that. “In the 2024 national elections, the politician and the party that convincingly promises a resurrection of the bridge will be elected,” said Darpan Dave.

A new bridge, if ever rebuilt, won’t hold the same value for Morbi’s people, but they want it nevertheless – just to keep their memories and identity intact. They always wished that the town’s “identity” was known far beyond its residents and visitors.

“Today, the world knows of our swinging bridge. But it doesn’t exist anymore,” said Devenbhai Sanaria, who runs a ceramic unit in the town popular as the ceramic capital of India.