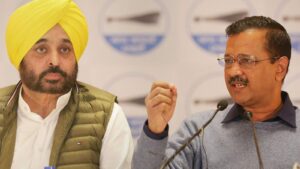 Delhi-NCR air pollution: Delhi air quality has been worsening by the day.

With Punjab Chief Minister Bhagwant Mann by his side, Delhi Chief Minister Arvind Kejriwal on Friday – amid criticism over air pollution in the National Capital Region (NCR) – said: “We have our government in Punjab and Delhi. But this is not the time for blame games and finger-pointing. It won’t help in finding solutions. We can blame them, and they can blame us but that would lead to nothing.” Kejriwal was apparently referring to the BJP as he is being question for inaction amid increasing air pollution in the NCR. Among other measures, the Delhi CM has announced closure of primary schools from Saturday.

Both the chief ministers asserted that the central government should intervene as the entire north India is facing the issue. “This is not just a problem in the national capital but entire north India,” Kejriwal said during a briefing, as he counted nearby cities – Jind, Manesar, Bhiwani, Faridabad, among others in neighbouring states – grappling with the worsening AQI (Air Quality Index). “We have said it several times that the central government needs to step forward and take specific measures,” he stressed.

The situation is expected to improve by next year with several steps being taken, both the chief ministers underlined. On farm fires, which have been counted as one of the reasons for air pollution, Kejriwal said: “We have been ruling for just six months in Punjab. Farmers can’t be blamed. They need solutions. We take the responsibility. ”

Underlining that “farmers also don’t want to burn residual crop”, Bhagwant Mann further pointed out: “If there would be high produce, there would be farm fires too. But multiple efforts have been taken across levels. We are not running away from the accountability.” He also pointed that additional infrastructure that may be needed. “Next year, in November, we expect to see better times. We will try for crop diversification… we will try to move our farmers from rice to other crops in Punjab. We can’t call farmers culprits,” the Punjab CM said.

Meanwhile, the Supreme Court is set to hear a plea next week, which seeks urgent steps on Delhi-NCR pollution.