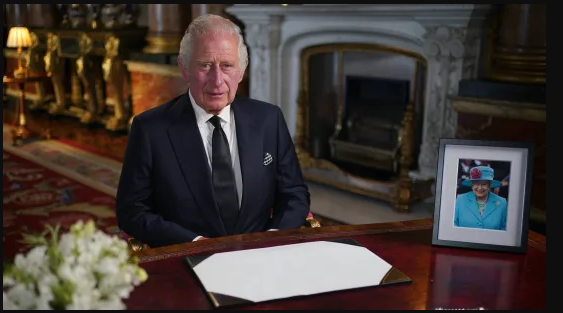 BBC – The front pages focus on King Charles and his first address to the nation. Many of the papers highlight the personal tone of his speech, as he reflected on his mother’s life while pledging to serve with loyalty, respect, and love.

The I weekend says King Charles III has had decades to prepare for this moment, and he “rose to the occasion.” The Express says he was “majestic.”

The Telegraph writes that his “heartfelt” speech was one of the most personal to have ever been delivered by a monarch. The Guardian describes the King as at his “most emotional” when paying tribute to the Queen.

The Times says he spoke with “warmth,” and The Mail describes him as being “sincere” and “surprisingly intimate”.

With his “moving” first speech in the role, King Charles has demonstrated he can fill the void left by the Queen, says The Sun. The paper describes his address as “full of love”, not just for his “darling mama” but for his wife, Camilla, and both of his sons.

There is also a lot of newspaper coverage given to the King’s surprise walkabout on Friday afternoon when he met well-wishers who had gathered in front of Buckingham Palace. The Express suggests that the mood was both “somber and jubilant,” as the crowd was “anxious to express their sympathy” but also “eager” to cheer the King as he took on his new responsibilities.