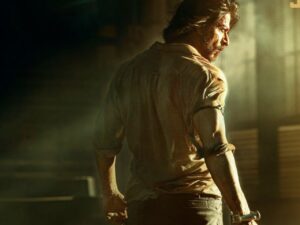 Pathaan teaser: Shah Rukh Khan delivers a birthday gift to his fans as the teaser of his first film in five years lands. The Siddharth Anand directorial stars Deepika Padukone and John Abraham in lead roles along with SRK. The movie has been produced by Yash Raj Films.

In the video, Shah Rukh presumably plays a spy who had undergone a risky mission and is claimed dead, only to come back and face off a rugged-looking John Abraham. Shah Rukh looks raw and ready to thrill his fans in his new avatar. The actor shared the video on his Twitter handle as he wrote, “Apni kursi ki peti baandh lijiye…#PathaanTeaser OUT NOW! Celebrate #Pathaan with #YRF50 only at a big screen near you on 25th January, 2023. Releasing in Hindi, Tamil and Telugu.”

Shah Rukh Khan has gone under a massive transformation to portray the role of the titular Pathaan for the Yash Raj movie. In an earlier interview, fitness trainer Prashant Subhash Sawant, who has worked with Shah Rukh for the past two decades at least, opened up about his fitness routine for the film.

“I have been training Shah Rukh for 24 years; in the last four, we have been working specifically for this film. Though the pandemic hampered the pace and progress, he has been consistent. Since his look in Pathaan is very different, Shah Rukh started doing a lot of lifting heavy. Previously, we used to do a lot of circuit training and cardio workouts, but now we have incorporated more strength training — which helped him look better and bigger. It took us two years to build the toned physique you see on screen. His frame and look have completely changed,” said Prashant.

Actor Hrithik Roshan was among the first few to appreciate the teaser. “Woah woah woah !! Unbelievable !! Boom 💥👊,” the actor wrote. Coincidentally, it is speculated that his character from War, Salman Khan from Tiger series and SRK’s Pathaan will come together to form a spy universe for Yash Raj Films. However, there has been no confirmation about this till now.

Meanwhile, music composers Vishal-Shekhar had also hyped up the movie and had mentioned in a couple of tweets that Pathaan tracks were going to blow SRK’s fans’ minds. “Back to the musicverse of #pathaan and the electrifying power of @iamsrk. It’s definitely gonna blow up! It’s positively going to get you off the floor! Need I say more? #vishalandsheykhar,” read the tweet.

Helmed by Siddharth Anand, Pathaan marks the comeback of Shah Rukh Khan after his 2018 release Zero tanked at the box office. The movie had starred Katrina Kaif and Anushka Sharma as well. Apart from Pathaan, Shah Rukh Khan has Atlee’s Jawan and Rajkumar Hirani’s Dunki in the pipeline.