People with dementia frequently experience mental health issues like depression and anxiety; according to earlier studies, 38% of those with moderate dementia experience these problems. 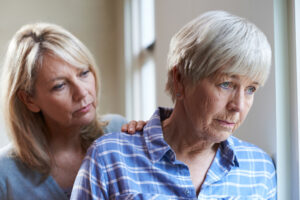 According to a recent study headed by UCL researchers, people with dementia who experience anxiety or sadness may benefit from talking therapy provided by the NHS.

People with dementia frequently experience mental health issues like depression and anxiety; according to earlier studies, 38% of those with moderate dementia experience these problems.

The latest study, however, is the first to examine whether talking therapies that are frequently provided in healthcare settings may be helpful in relieving symptoms. It was published in the journal – eClinicalMedicine.

Researchers looked at information from 2,515,402 individuals who received treatment through England’s national “Improving Access to Psychological Therapies” (IAPT) service between 2012 and 2019 who had clinically significant anxiety or depression.

IAPT is a free NHS service that offers CBT (cognitive behavioural therapy), counselling, and guided self-help, with sessions provided in person, in groups, or online. It also offers evidence-based therapies for treating anxiety and depression.

Participants had to meet one of two criteria in order to be included in the study:

* Clinical levels of depressive symptoms as determined by a standard questionnaire*, which takes into account elements including a loss of interest in activities, sleep problems, and feelings of low mood.

* Clinical levels of anxiety based on a benchmark assessment that queries patients on their amount of worry or difficulty unwinding.

The researchers looked at all 1,549 individuals who had a dementia diagnosis prior to beginning IAPT treatment in order to examine results for those with dementia.

In order to determine whether therapy outcomes for those with dementia varied from those without dementia, researchers also used a control group of 1,329 individuals. These individuals were chosen from the entire dataset and matched to the dementia patients in terms of age, gender, depression and anxiety severity at the beginning of treatment.

The treatment was clinically effective for dementia patients, according to the researchers, and 63% of them reported fewer depressive and anxious symptoms after receiving IAPT. In the meantime, about 40% fully recovered.

In contrast, 47% of participants in the control group recovered, while 70% of people reported improved symptoms.

Georgia Bell, the lead author and a PhD student in psychology and language sciences at UCL, noted that anxiety and despair are particularly prevalent among dementia patients. They are incredibly crippling and are linked to worse results for both the dementia patient and their caregivers.

This is the largest study yet conducted to examine the effectiveness of psychological treatments for dementia patients. Our findings imply that, although having a lower chance of recovery or improvement than those without dementia, psychological therapies provided in primary care mental health facilities can be helpful for patients with dementia.

“Consequently, our findings support the use of IAPT to treat anxiety and depression in people with dementia. We hope this study will have implications for encouraging referrals and adaptations to increase access and enhance outcomes for people living with dementia.”

Prior to this year, there was insufficient evidence to support the effectiveness of talking therapy for dementia patients; nevertheless, an assessment of the available data, headed by UCL experts, validated its usefulness. *** This most recent study strengthens that by demonstrating the viability of such a benefit from NHS treatment options.

The Alzheimer’s Society and Wellcome financed the study.

According to Dr. Richard Oakley, Associate Director of Research at the Alzheimer’s Society, “Many people with dementia also have depression and anxiety, making it even more difficult for them and their caregivers to cope with symptoms and, for some people, even contributing to a faster decline in memory and thinking problems. After a diagnosis, consistent and easy access to mental health support is crucial.

This study, which was supported by the Alzheimer’s Society, is the first to examine the efficacy of therapy for dementia patients in a practical context. Even while their reaction wasn’t as robust as that seen in the general population, it indicated that people with dementia showed a considerable reduction in their symptoms of anxiety and despair when treated with therapy.

This study supports the findings of our most recent report, Left To Cope Alone, which stressed the value of prompt access to mental health care. We discovered that 61% of dementia sufferers currently require mental health care, however, in 2018, only 0.2% of the 1 million yearly referrals to Improving Access to Psychological Therapies (IAPT) programs were for dementia sufferers.

“Despite the fact that this study did not compare the various forms of therapy, types of dementia, or whether accommodations had been made for those suffering from the condition, it still emphasizes the urgent need to advance real-world therapy for those with dementia, with modifications to increase its efficacy and accessibility.”