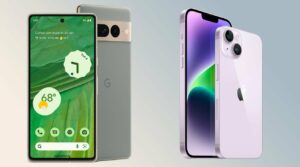 The Google Pixel 7 and Apple’s iPhone 14 Plus both boast of excellent cameras. But which one has an edge? Here’s our comparison of the two.

Pitting flagship phones against each other is a tough one. That’s mostly because these phones have managed to achieve a certain standard and reliability, especially in the camera department. And this challenge of differentiating gets harder when you place the Google Pixel 7’s camera against that of the Apple iPhone 14 Plus. Both Google and Apple have set fairly high standards when it comes to their respective cameras. But does one have an edge over the other? We used both phones to see how Apple and Google’s latest stack up against each other in the still photography department and here’s our comparison.

The main camera has sensor-shift optical image stabilisation (OIS), and the camera supports up to 2x optical zoom out. The new iPhone 14 Plus also gets the Photonic Engine from Apple, which is the company’s new computational photography technology designed to boost low-light camera performance. The previous iPhone 13 series does not have this. The Photonic engine works in the background and this is not a feature you turn on or off. Apple is using a combination of the camera and device hardware coupled with machine learning and new software algorithms to boost image quality with this.

In comparison, the Pixel 7 has a 50MP main camera along with a 12MP ultra-wide camera. The front camera is 10MP on the Pixel 7. But Google’s phone is rarely about the specifications and more about the software tweaking inside. The camera comes with several software-focused features such as the SuperZoom (up to 8x on the Pixel 7 and up to 30x on the Pixel 7 Pro), Magic Eraser, the ability to unblur old photos, etc. Google is also relying on computational photography to ensure that your photos are sharper, and more detailed even in low light. It has also introduced Real Tone with the Pixel 7 camera to ensure that the camera is able to represent skin tones more accurately, especially for those with darker skin.

Apple iPhone 14 Plus vs Google Pixel 7: In bright daylight scenarios

If you’re using these phones in bright daylight as I did, the results will be excellent no doubt. Both Apple and Google are giving options here to customise and tweak colours based on personal preferences. In Apple’s case, you can choose a preset colour profile ranging from Standard to Rich Contract (richer colours and stronger contrast) to Vibrant Style (more vivid colours) to Warm Style (golden undertones) and a Cool tone (more blue undertones). The standard is the balanced option, more natural and more iPhone in a way of speaking.

Even on the Pixel 7, you can actually choose to go in a warmer or cooler direction — something which I had not seen in a previous Pixel phone. You just need to tap the screen a little menu opens up and on the right side, there is a little thermometer with an orange and blue scale. You can just go up and down the scale to see what colour is best suited to your needs.

While both cameras manage to capture details and colours, with the iPhone 14 Plus the blues were more vivid and richer, compared to the Pixel 7. I thought the Pixel 7 was more natural in some scenarios, though some might prefer the iPhone. But what is evident from both sets of photos is that these are excellent point-and-shoot cameras during the day with minimal effort required from both sides.

If you look at the pictures of the dog below — a fairly difficult subject to click using Portrait mode– you can see how different the approach is from both Apple and Google, even though the picture are not exactly the same.

The Portrait mode is one department where I clearly prefer the Pixel 7 as I’ve noted in my reviews as well. There’s no moving back and forward, you just point at anyone or any creature and the Pixel 7 manages to create that subject and background segmentation. With the iPhone 14 Plus, the Portrait mode is not bad, but it does feel very artificial compared to the Pixel 7, which manages to do this effortlessly.

This is where it gets a bit tricky. Once again both the iPhone 14 Plus and Google Pixel 7 do a fine job in delivering sharp photos, even in poor lighting. But keep in mind that final results will depend on your camera skills as well, the amount of light in the room and just how still you can stand while the device does the job. With both the Pixel 7 and iPhone 14 Plus, I noticed that the respective night mode took around three seconds to capture the shot when I had completely cut off any direct light source in the room.

See also  Nokia 5710 XpressAudio Review: A Brilliant Idea And A Practical Phone
In the next set of photos with the peacock feather, Superman and the elephant, I turned on a studio light, though it is pointing in another direction. But this was enough to let both the iPhone 14 Plus and Pixel 7 deliver much brighter photos.
With the iPhone 14 Plus, I felt it does brighten the overall picture more, but there’s no noticeable noise added to the photo as such. The Pixel 7 actually keeps it a bit more muted.

Apple iPhone 14 Plus vs Google Pixel 7: So which one has the edge?

If you are looking to buy a flagship phone with a focus on the camera, both the Pixel 7 and iPhone 14 Plus are reliable choices to consider. Based on my experience, the camera on both phones is top-notch and will not leave a user disappointed. Of course, the Pixel 7 has an advantage in terms of its price compared to the iPhone 14 Plus.