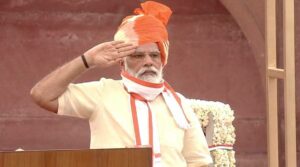 Prime Minister Narendra Modi said India’s past, present and future will never be complete without the tribal community and that every page of the story of the country’s freedom struggle is filled with tribal valour

Addressing the gathering, the Prime Minister said that it is always inspiring to be in the holy land of Mangarh which is a symbol of tapasya, sacrifice, bravery and sacrifice of our tribal brave hearts, the government said in a statement. “Mangarh is a shared heritage of the people of Rajasthan, Maharashtra, Madhya Pradesh and Gujarat”, he said. The Prime Minister also paid tributes to Govind Guru whose death Anniversary fell on October 30. “Great freedom fighters like Govind Guru were the representatives of India’s tradition and ideals”, the Prime Minister added. “Govind Guru lost his family but never lost his heart and made every tribal person his family.”

Not only did Govind Guru fight against Britishers for the rights of the tribal community, the Prime Minister pointed out that he also campaigned against the ills of his own community as he was a “social reformer, spiritual leader, a saint and a leader”. “India’s past, present and future will never be complete without the tribal community. Every page of the story of our freedom struggle is filled with tribal valour.”

The Prime Minister commemorated the struggles of the community that date back to as early as the 1780s when Santhal Sangram was fought under the leadership of Tilka Manjhi. He mentioned 1830-32 when the country witnessed Larka Andolan under the leadership of Budhu Bhagat. In 1855, Sidhu-Kanhu Kranti energised the nation. Bhagwan Birsa Munda inspired everyone with his energy and patriotism. “You will not find any patch of time starting from the beginning of slavery centuries ago, till the 20th century when the flame of Azadi was not kept ablaze by the tribal community”, the Prime Minister said. He mentioned Alluri Sitarama Raju in Andhra Pradesh. In Rajasthan, even before that, the Adivasi Samaj stood with Maharana Pratap. “We are indebted to the tribal community and their sacrifice. This samaj has preserved India’s character in nature, environment, culture and traditions. Today is the time for the nation to thank them by serving them”, the Prime Minister said.

HT first reported in August that the government plans to honour the unsung heroes by displaying their photographs and details of their achievements in the new Parliament building.

The Prime Minister’s push to commemorate the tribal community also comes ahead of the Gujarat assembly election, where the tribal population forms a significant vote bank.

Inaugurating a series of development projects in Tapi district of Gujarat on Thursday, Prime Minister Narendra Modi hit out at previous state governments for ignoring the interests of tribal people and said the Bharatiya Janata Party (BJP) had always given them priority. Speaking at an event in the town of Vyara, the PM said there were political parties that had a history of making false promises to tribal people.

The development initiatives worth over ₹1,970 crore that the PM laid the foundation for include improvement of the road from Saputara to the Statue of Unity along with the construction of missing links, and water supply projects worth over ₹300 crore in Tapi and Narmada districts.

He added that the Gujarat government will spend more than ₹1 lakh crore on the second phase of the Vanbandhu Kalyan Yojana.The scheme was launched in 2007 with an allocation of ₹15,000 crore for the development of tribal areas in the state.