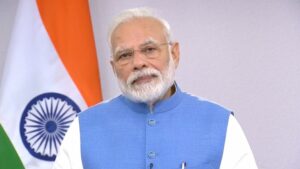 By synergising the defence PSUs with the private sector and startups, PM Modi has signalled that India is striving towards space, the next generation of national offence and defence.

Prime Minister Narendra Modi is all set to launch Defence Space Mission, the next generation of national offense and defence, even as he inaugurates the DefExpo 22 at Gandhinagar in Gujarat on Wednesday.

As India celebrates Azadi ka Amrit Mahotsav to mark the 75h year of Independence, 75 challenges, providing a holistic overview of stages of space mission, have been curated to boost the country’s space-related defence preparedness within the 1967 Outer Space Treaty. The challenges will come alive on the Defence Ministry website, the moment PM Modi presses the button in Gandhinagar.

With the domain of warfare expanding beyond land, air, sea, and into space, the Defence Space Mission is being set up with multiple dual use technologies to provide fillip to the nascent space industry in India. It is learnt that this timely government encouragement could make India a front leader in second space age, characterized by rapid privatisation of space.

India’s development is highly dependent on space based technologies like NavIC, remote sensing, and space based internet. The Space Defence Mission will provide a boost to space based tech with multiple civilian and military applications.

The proposed 75 challenges have been categorized into various initiatives of the Department of Defence Production with some 35 open to more than 50 identified start-ups, 20 under Make 1 with partial government funding and remaining 20 under heavy government funding route.

While the DRDO has agreed in principle to hand-hold the industries by providing technical consultancy and access to facilities, the ISRO has also agreed to support the mission through tech support, procuring and inducting dual use technologies on productization.

It is understood that the ownership, Minimum Order Quantity (MOQ), and projected development budget of each challenge was ascertained from the end users, like Indian Army, Indian Air Force, and Indian Navy, and based on inputs, the list of challenges to be launched has been finalized.

There have been multiple rounds of meetings of all stakeholders conducted with the defence secretary and additional secretary of defence production. Defence minister Rajnath Singh has also reviewed the progress of the mission.