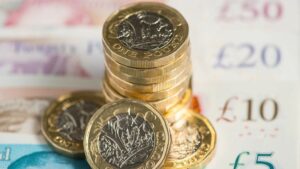 The pound rose and government borrowing costs fell on Monday, as investors welcomed the news that Chancellor Jeremy Hunt is to fast-track tax and spending measures.

Sterling gained 1% against the dollar to trade around $1.13 in morning trading.

The drop in yields suggests financial markets are welcoming the prospect of changes to economic plans.

Monday is the first time the UK government bond market has reopened since the Bank of England’s emergency support programme ended on Friday.

On Friday, Prime Minister Liz Truss sacked Kwasi Kwarteng as chancellor and said the mini-budget “went further and faster than markets were expecting”.

The mini-budget was blamed for causing turmoil in the financial markets. The aftermath of Mr Kwarteng’s announcements on 23 September saw the pound slump to a record low of $1.03 and the cost of government borrowing rise sharply.
“The chancellor will make a statement later today, bringing forward measures from the Medium-Term Fiscal Plan that will support fiscal sustainability,” a Treasury spokesman said.

Mr Hunt is expected to fast-track many billions of pounds worth of tax and spending measures from his debt plan, announcing them a fortnight earlier than expected.

It is the latest of a series of U-turns on policies announced in the mini-budget.

The announcement of the £18bn U-turn on corporation tax on Friday and the firing of Mr Kwarteng did not appear to reassure investors, with UK government borrowing costs climbing on Friday afternoon.

But on Monday morning, the cost of government borrowing fell across a range of bonds traded on the financial markets.

They had hit 5.17% on 28 September in the aftermath of the mini-budget when Mr Kwarteng set out one of the biggest tax cuts packages seen in decades but did not explain how they would be funded.

However, the yield is still higher than it was before the mini-budget. It was at 3.7% on 22 September.

Meanwhile, the yield on bonds due to be repaid in five years’ time, which underpins the cost of new five-year fixed rate mortgages, fell to 4.01% on Monday.

The surprise move by Jeremy Hunt reflects concern about markets for government debt reopening this morning, without the parachute of emergency help from the Bank of England.

The Treasury, under the new chancellor, has decided it cannot wait, and there is no point in waiting to announce a series of measures, from more U-turns, to new tax rises and spending cuts.

Only the National Insurance cut seems safe for now, as it is nearly fully legislated. The measures should be announced by mid-morning, and then in the Commons this afternoon.

It is extraordinary that a G7 country needs to repeatedly manage the expectations of sceptical markets in this way.

But the new chancellor is keen to show the markets the government knows what it needs to do to win back economic credibility, and that in political terms too, he is in control of events.

The early response showed sterling up, and government borrowing costs down.

But there might not be much left of the now notorious mini-budget by this afternoon.

Analysts welcomed the news of an announcement from Mr Hunt but said the figures would come under close scrutiny.

“I think you’ll see a positive reaction to the statement, assuming that the math adds up a bit more than it did before,” Shanti Kelemen, chief investment officer at M&G Wealth, told the BBC.

“What we saw on Friday, was we had markets rise in in the lead up to the news the news that Kwarteng was resigning, but then as soon as it happened, we had a sell-off afterwards.

“So I think it’ll be important that the actual content of what’s being delivered adds up and has some more meat and numbers behind it than what we’ve seen previously.”

The Bank of England stepped in to stabilise the financial markets following the mini-budget, announcing an emergency bond-buying scheme.

Ms Kelemen said that the latest moves from the chancellor showed he acknowledged the government’s role in reassuring the markets.

“They’ve recognised that the uncertainty is damaging the economy,” she said.

The shift in the government’s economic policies and market turmoil in recent weeks has led to Goldman Sachs downgrading its forecasts for UK economic growth.

The investment bank revised its 2023 UK economic output forecast from a 0.4% drop to a 1% contraction.

Goldman said it expected a “more significant recession in the UK” in part due to “significantly tighter financial conditions” and the planned higher corporation tax rate from next April.