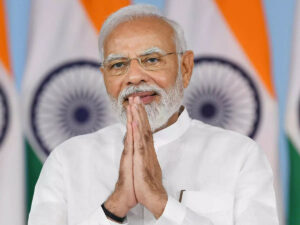 Prime Minister Narendra Modi will address a public rally at Himachal Pradesh’s Chamba on October 13, marking his second visit to the poll-bound hill state in less than 10 days.

He will also launch Pradhan Mantri Gram Sadak Yojana (PMGSY)-III and address the rally at famous Chowgan of Chamba.

The PM’s visit would also bolster the Bharatiya Janata Party’s (BJP’s) campaign, which aims to achieve ‘Mission Repeat’ in Himachal Pradesh, where the government changes every five years.

Earlier, the PM’s visit was being planned for October 14, the day when Congress general secretary is likely to launch the party’s poll campaign from Solan.

PM Modi had visited Bilaspur town on October 5 where he launched four projects worth more than ₹3,650 crore, including All India Institute of Medical Sciences (AIIMS), and later participated in the Kullu Dussehra celebrations.

Last month, he had virtually addressed a rally of Bharatiya Janata Yuva Morcha (BJYM) after his helicopter couldn’t fly to Mandi due to bad weather.

The ruling BJP has been trying to lay a strong groundwork for assembly elections in Himachal by organising workers’ meeting at block levels, while its top leaders are also making frequent visits to the state to feel the pulse.

The BJP is hoping to retain power in the state, a feat that no party has achieved for nearly four decades.

Before PM Modi, BJP’s national president JP Nadda, who hails from Himachal, would be on a tour to the state and address party workers’ meeting in Kangra, Hamirpur and Mandi starting Sunday.

Union information and broadcasting minister Anurag Thakur is also on a visit to Himachal.

The Election Commission of India is likely to announce the poll schedule in Himachal soon after the PM’s rally. The polling may be held early in November.

Meanwhile, chief minister Jai Ram Thakur convened a review meeting at Chamba on Saturday and directed the officials to put in place elaborate arrangements for the PM’s visit.

Adequate and foolproof arrangements should be made to make PM Modi’s visit to aspirational district Chamba a success, Jai Ram said.

He asked the districts authorities to make sure that the general public does not face any inconvenience.

The CM said that arrangements must also be made to ensure smooth traffic movement.

The district officials must ensure uninterrupted water supply in Chamba town and a special cleanliness drive be launched before and after the rally, he added. The CM also visited Chowgan and took stock of the preparations.