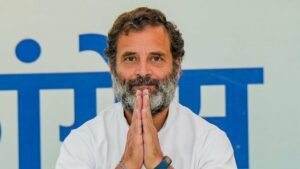 Congress leader Rahul Gandhi stated there was a massive anti-incumbency against the BJP government in Gujarat.

Expressing confidence that Congress will wrest power from BJP in poll-bound Gujarat, Congress leader Rahul Gandhi on Monday stated there was a massive anti-incumbency against the state government. He also contended that the Aam Aadmi Party (AAP) has only created a buzz in the state purely on the basis of advertisements and had no support on the ground.

“Congress is contesting the Gujarat elections effectively. AAP is only in the air. It has nothing on the ground. Congress is a solid party in Gujarat,” Gandhi said while addressing reporters during the Telangana leg of the Bharat Jodo Yatra in Kothur. He added that there was a lot of anti-incumbency sentiment against BJP in Gujarat.

Gandhi refused to comment on the tragedy in Gujarat’s Morbi where a bridge collapsed leaving more than 130 dead, saying he did not wish to politicise the incident. Two minutes of silence were observed for those who passed away in the tragedy at the beginning of the press conference.

Days after the election for the Congress president, Gandhi also wondered when RSS-BJP and TRS will hold their own internal polls. He also ruled out any tie-up between TRS and Congress.

“The corruption, the approach, the attitude of TRS is not acceptable to us. We are diametrically opposite to what they are doing,” he said. He also said that KCR was “free to imagine that he was leading a national or even an international party”, when asked about the renaming of TRS to Bharath Rashtra Samithi (BRS).

Continuing his series of attacks on the ruling BJP, the former Congress president said that a “lot of damage was done to the institutional framework of our country under the current government at the Centre”.