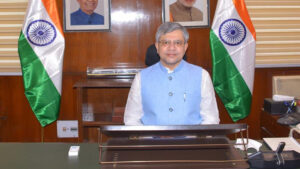 The Ministry of Railways will roll out projects worth Rs 90,000 crore in the months ahead to remove bottlenecks in the movement of freight, Union minister for railways Ashwini Vaishnaw said on Sunday.

“By now, we have identified projects worth Rs 90,000 crore, or $10 billion, to remove all potential bottlenecks in the movement of freight. Some of these are small projects, some are bigger in scale. The projects will be sanctioned in the coming months, and will help us realise the aspiration of loading 3,000 million tonnes (mt) of goods,” Vaishnaw said at the 17th Foundation Day of Dedicated Freight Corridor Corporation of India Ltd (DFCC).

The minister did not get into the particulars of the new projects, which are being closely monitored for a rollout by Railway Board Chairman V K Tripathi. At the start of the financial year, the ministry had rolled out a Rs 1.5-trillion procurement plan to augment railway performance.

“The prime minister sincerely believes that the only way to transform the Indian economy is to transform Indian Railways. This shows that the support for railways is foremost in the minds of the top leadership of this country,” the railways minister said.

Under Mission 3000, the national transporter intends to double its cargo loading from 1,418 mt in 2021-22 to 3,000 mt by 2027. It is widely understood that dedicated freight corridors (DFCs) will play a key role in this endeavour. So far, 56 per cent of the two DFCs of the railways are operational, with completion of a majority of the network expected by 2023.

See also  Dhanteras 2022: 5 Gold Investment Options To Look Out For This Diwali Season

With these infrastructure plans, the ministry would need extensive funding, especially through budgetary support, as previous public-private-partnership (PPP) efforts by railways did not elicit a strong response.

“Through the support of the railway officials, we were able to get an additional Rs 12,000 crore from the Centre for this financial year. Now, we should aim to reach at least Rs 2 trillion as the capital support from the general budget for railways,” Vaishnaw said, in context of the need for railways to execute more capital investment to achieve its modal logistics share aspirations of 40 per cent under the National Rail Plan. The ministry of railways was allocated Rs 1.37 trillion as budgetary support in the Union Budget for 2021-22

Addressing the ceremony, DFCC Managing Director R K Jain said a new state-of-the-art command centre for the western dedicated freight corridor (WDFC) will soon be launched at Ahmedabad, which will give a fillip to crucial industrial goods traffic of the country. WDFC connects to significant ports such as Mundra, Kandla, and Pipavav.

Meanwhile, the DFCC, which is already working on the project reports for three new DFCs — East Coast, East-West, and North-South — may have a different outlook in the future. The minister sought for the PSU to look at smaller focused freight corridors for short distances, where potential for revenue growth and goods loading is significant, such as corridors between ports and major mining areas.

Business Standard had previously reported that the Centre may axe the three new DFCs to enhance existing corridors and make smaller focused routes branching out of the existing eastern and western DFCs.