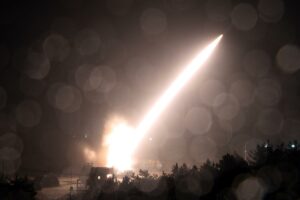 Hours after North Korea flew a ballistic missile over neighbouring Japan on Tuesday, residents in a South Korean seaside town were startled to see flames leaping from a nearby military base and missiles soaring into the sky.

It wasn’t the start of a war, but a South Korean display of military force that went wrong in a blaze of burning rocket fuel.

Intended as a demonstration to deter North Korea, South Korea said it was conducting a nighttime drill with Hyunmoo-2C short-range ballistic missiles (SRBMs) when one failed shortly after launch and hit the ground inside the base in Gangneung, on South Korea’s east coast.

The missile was carrying a warhead, but it wasn’t armed and didn’t explode, and there were no casualties, a military official told a briefing. The official apologised for causing residents to worry.

The burning rocket fuel lit up the night sky, however, sparking calls to emergency responders and fuelling social media rumours that went unanswered for eight hours until the military disclosed the drill and explained the fire.

“All of a sudden I heard a roar and it made me think something has gone wrong,” said Kim Hee-soo, a nearby resident. “So I looked at the area where they’ve fired Hyunmoo missiles before and there was flame and smoke and it was a total mess.”

A video that Kim shared on social media went viral overnight, and other residents chimed in with concerns and fears amid silence from military authorities.

“I thought it was a war,” one said in a comment on the video.

Another said their house was shaken by the blast, and a third said they evacuated, thinking a landslide was headed for their home.

The 24-hour disaster management office in Gangneung told Reuters that it had received several calls from worried residents.

An official with the agency said the military had confirmed it was conducting a drill, but did not explain the fire, and no city firefighters were called to the base.

Kim said he is used to missile launches from the base, including a joint US-South Korea daytime drill in June in response to other North Korean tests.

“I’ve never experienced such an accident in my years having been born and raised here,” said Kim, 43. “It makes me very nervous and I hope that they can let us know whenever they conduct a training.”