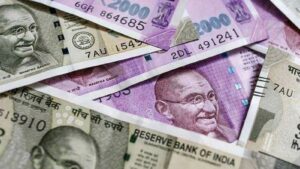 RBI not yet seen intervening heavily for the rupee, expected to step in around 83.40/$1 mark

The rupee weakened to a new low versus the US dollar on Thursday as some Federal Reserve officials reiterated the central bank’s commitment to aggressive rate hikes, leading to a jump in US bond yields and the greenback.

The Rupee touched a new low of 83.21 per US dollar as against its previous close of 83.02. Wednesday’s close marked the first time that the Indian currency breached the 83/$1 mark.

Dealers said that the Reserve Bank of India was not seen intervening heavily in the market through dollar sales, but the central bank is expected to do so around the 83.40/$1 mark. Over the last couple of days, the RBI is said to have eased up on market interventions through US dollar sales.

The Fed, which has already hiked rates by 300 bps so far in 2022, is widely expected to announce a fresh 75-bps rate hike at the end of its next meeting on November 2. Higher interest rates in the US lead to a flight of capital to the world’s largest economy and exert pressure on emerging market currencies such as the rupee.

On Wednesday, Neel Kashkari, president of the Minneapolis Federal Reserve Bank, said that the underlying momentum of inflation in the US had probably not yet peaked, strengthening the case for steep hikes.

“The rupee has opened lower in line with the weakness witnessed in other Asian currencies especially Chinese yuan due to risk aversion and overnight rally in the dollar index along with rising us treasury yields to new highs. We expect the RBI to intervene between 83.20 to 83.5 levels to prevent excessive rupee depreciation,” said Ritesh Bhansali, vice-president, Mecklai Financial Services.

“Global currencies fell sharply against the dollar, and DXY rose by 0.8% as risk appetite of investors declined. Higher than expected inflation data in UK and Eurozone reaffirmed fears that Central Banks will maintain their aggressive stance,” economists at Bank of Baroda’s wrote.