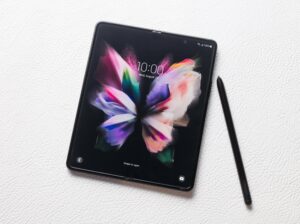 Samsung’s next Galaxy Z Fold smartphone could not just come with S-Pen support but also a slot to hold and charge the stylus.

It has been a while since Samsung has officially shut down its Galaxy Note series phones, which made the large-screen-meets-stylus experience popular on mainstream flagships. Since then, support for the Samsung S-Pen has been introduced on the Galaxy Z Fold 4, the first foldable by Samsung to feature support for the in-house stylus.

However, the lack of one key feature meant that the S-Pen experience on the Galaxy Z Fold 4 was not as seamless as on the Samsung Galaxy Note series – this was the missing S-Pen slot where you could tuck away the stylus when it wasn’t in use. That said, recent reports suggest Samsung may address this shortcoming soon.

A new report by The Elec via GSMArena suggests that Samsung could add a slot to tuck the S-Pen in for future Z-series Galaxy Fold phones. The report also adds that adding an S-Pen slot to the Galaxy Z Fold 4 was also initially planned, but space limitations inside the phone didn’t let the addition materialise.

Adding a slot to the Galaxy Z series is a challenge

The Samsung Galaxy Z Fold phones fold around a central hinge. While we have had four iterations of the phone since 2019, Samsung is yet to perfect the hinge which comes right in the middle of the device, and causes space constrictions for the rest of the device.

Adding a slot for the S-Pen amidst this will only be a bigger challenge, given that the slot will not just include space for the S-pen but also a charging mechanism. Meanwhile, the move will also be a challenge at a time when Samsung is trying to make the Z series phones slimmer and more durable.

See also  Apple iPhone 14 Calls 911 On Rollercoasters When ‘Crash Detection’ Is On: Report

We should have more details as we head into 2023, as the next Galaxy Z Fold is unlikely to launch before August 2023, a year after the launch of the current Galaxy Z Fold 4.