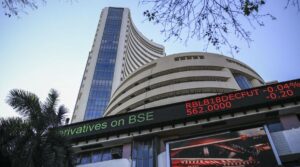 BSE Sensex and NSE Nifty 50 ended the choppy session in red on Monday. BSE Sensex was down 200 points or 0.34 per cent to 57,991, while NSE Nifty 50 settled 74 points or 0.43 per cent down at 17,253. Index heavyweights such as Reliance Industries Ltd (RIL), HDFC Bank, ITC, Housing Development Finance Corporation (HDFC), Asian Paints, among others contributed the most to the indices’ losses. Broader markets also ended in the negative territory. S&P BSE MidCap index fell nearly one per cent or 221 points to settle at 25,164. S&P BSE SmallCap index finished at 29,014, down 0.6 per cent or 169 points. Bank Nifty index fell 0.2 per cent to settle at 39,093. India VIX, the volatility index jumped 4.3 per cent to finish as 19.62 levels.

Due to lack of positive strength in global markets and persisting worries about more rate hikes by the key central banks going ahead, investors are not taking any chances and steadily trimming their holdings. Caution along with weak market sentiment will prevail as all eyes will be on the US FOMC minutes to be released on Wednesday, which will give some hint about the future rate setting decision by the Fed. Technically, the Nifty found support near 17050 and bounced back sharply. On daily charts, the index has formed a bullish candle and also formed a reversal formation which is broadly positive. For traders the support has shifted to 17150 from 17050. Above the 17150, the index could retest the level of 17400-17450. On the flip side, a fresh round of selling is possible only after the dismissal of 17150. Below which, the index could slip till 17050-17000.

Nifty recovered well from the opening lows by taking support from the 10 day moving average. In the process it also filled the gap made on Oct 04, nullifying the large bullishness. Nifty could stay in the 17102-17337 band for the near term.

Fear of an aggressive rate hike by the Fed on the back of strong employment data in the US, disrupted the global equity trend. Inflation in the US is forecasted to stay high given low supply and high demand scenarios. To bring some parity in the economy, the Fed will have to target to lower demand by increasing the unemployment rate, which is not factored by the market. In addition, rising crude prices and depreciating rupee is increasing the risk of imported inflation in India, affecting the domestic market.