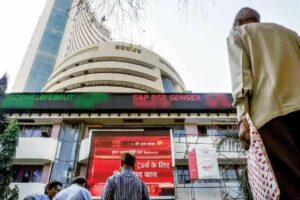 The benchmark indices–Sensex and Nifty–snapped seven-session losing streak and ended over 1.6 per cent higher on Friday led by banking, financial and metal stocks after the Reserve Bank of India (RBI) hiked its repo rate by 50 basis points (bps) to 5.90 per cent in a bid to bring down the inflation.

The RBI raised its benchmark lending rate by 50 bps to 5.90 per cent, its fourth consecutive rate hike, in a bid to check the raging inflation which has remained above the 6 per cent tolerance level for the past eight months. So far in the ongoing financial year 2022-23, the central bank has raised the benchmark rate by 190 bps.

Commenting on the market, Santosh Meena, Head of Research at Swastika Investmart said, “The Indian equity market witnessed a sharp bounceback after a seven-day fall. The fall in the dollar index and no negative surprise by the RBI led to a strong short-covering in the market. Technically, the Nifty was sitting near the 16,800-16,635 demand zone and derivative data was extremely oversold as FIIs started the October series with 87 per cent short positions in the index future. Therefore, we are seeing a powerful short-covering rally. The Nifty witnessed a bullish engulfing candlestick pattern on the daily chart from the support of the 100-DMA, which is a very encouraging sign for the bulls. On the upside, 17,190 is an immediate hurdle, and 17,325-17,425 is the next critical supply zone.”

“Bank Nifty also witnessed a sharp bounce back from the psychological support level of 37,500. Above this level, we can expect a move towards the 39,700 level which may coincide with the 20-DMA,” Meena said.

Vinod Nair, Head of Research at Geojit Financial Services noted, “An in-line rate hike along with the RBI’s confidence in the economy’s growth momentum aided the domestic market to alter the seven-day losing streak. The decision to retain inflation at 6.70 per cent with a marginal cut but a healthy GDP forecast of 7.0 per cent indicates the resilience of the Indian economy. Although the commentary warned about prevailing risks to the domestic economy from the global economy, the MPC refrained from sounding very hawkish. Continuation of the policy stance as ‘withdrawal of accommodation’ indicates more rate hikes in the future, but data-driven.”