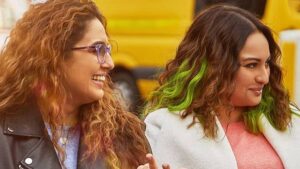 Double XL, which follows the journey of two plus-size women, will release in theatres on November 4

Director Satramm Ramani, who is gearing up for the release of his second feature film Double XL, feels that the film teaches acceptance for one’s body but does not encourage unhealthiness. Set to release in theatres on November 4, the Huma Qureshi-and-Sonakshi Sinha-starrer spreads awareness against body shaming and follows the journey of two plus-size women. In a candid chat, Ramani opened up about his experience while shooting Double XL and what makes this film special.

How did you come on board for Double XL?

Satramm Ramani: Mudassar (Aziz) had a brief thought about the story. He was about to start writing the screenplay and dialogue of the film. We met at a common friend’s place, and he saw the first cut of my film Helmet. After a couple of days, he called me and said, ‘This story has social messaging as well as commercial value. There’s no preachy approach to it. Would you like to direct this film?’. I heard the story and found it relatable. The real world attracts me, so I said yes to direct. He wrote the screenplay and dialogue in a couple of months and narrated it to us. Everyone was excited, and that’s how it started.

Were you well aware of how body shaming affects a person before starting the film? Or did you get a better understanding of it during the course of the film?

Satramm Ramani: Often while getting ready in front of a mirror, my wife would ask me whether she has put on weight. There is insecurity about weight. We might not give much attention to it but it is around us. So, the awareness was definitely there, but gradually when we went about the shoot, we saw how positive people are about it.

We were not getting a hotel location for shooting. They said they don’t permit film shoots. We were about to leave when suddenly the general manager asked what the film was about. So, we briefly told him that it’s about two plus-size females who want to achieve their dreams but their size is an obstruction because of how society sees them.

He was moved by the idea and allowed us to shoot. He said, ‘I am allowing you to shoot here because of the film that you’re making. I think everyone would want to see the film.’ Because his 17-year-old daughter was going through the same trauma, he said, ‘It would be an injustice from my end if I don’t give you this location for this film.’ It was a very kind gesture.

So, what is the philosophy of Double XL?

Satramm Ramani: Your dreams don’t need to see your size. You have to trust your capabilities, not your size.

How different are Sonakshi and Huma as actors and what was your process with both of them?

Satramm Ramani: It was a great opportunity for me because both of them are fabulous actresses. Both of them work in different ways. Huma likes to live the character, she enhances the character from the script, and comes up with her own mannerisms and performance.

Sonakshi is blessed. She is a director’s actor. She has a switch button. She can have any emotion at any given time. She’d be like, ‘What do you want? I’ll give it to you’. She has that kind of approach toward performances.

Satramm Ramani: A simple brief where everyone was on the same page that we have to be positive about the fact that this film is not only about fat shaming but body shaming — overweight or underweight. There’s a beautiful line in the film, which is also the philosophy of the film, where Sonakshi says, “Pata nahin kisi ne ek standard set kar diya hai aur hum sab follow karte jaa rahe hain.” (Somebody has set a standard and we’re just following it.)

Someone has set a standard that you have to look a certain way, size, colour, or whatever. Who has set that standard? And why is that so important? We didn’t want to cross any lines or be offensive or preachy. We wanted to entertain people as well as convey our message.

Do you think these standards are set by the giants of the cosmetic/beauty industry and we’re mere pawns following the latest trends?

Satramm Ramani: There are many standards. If you analyse one, then you’ll have to analyse every standard. Be it cosmetics, fitness, clothing, or whatever, every brand is working on a set standard. The brand strategy is what? How society works and what people want. And they constantly give us the same thing. We have a recall value of a standard, and that is the reason why we are not able to leave those standards.

There’s a huge disparity between what is being preached about beauty and what is practised. Do you think cinema can change people’s perspectives?

Satramm Ramani: If cinema can bring trends, then cinema would definitely have an impact on creating something that is good for society. We follow trends from cinema, good or bad, right? Whether it’s fashion or riding bikes, people feel confident wearing certain clothes because their hero is wearing those clothes. Similarly, there’s the impact of messaging because ultimately, there’s an emotional connection.

Were you and the writer mindful about obesity not getting glorified?

Satramm Ramani: We have made one thing very clear that there’s no miscommunication that would lead to unhealthiness. We are not promoting unhealthiness. And that is why the film focuses more on their dreams. We are not promoting careless eating. What we are saying is that these two characters are healthy but plus-size. Don’t measure their dreams based on their sizes. So, that is the whole idea.

Every film gives something to and takes something from an artist. What did Double XL give and take?

Satramm Ramani: It gave me a bunch of friends and family. We managed to make the film smoothly in the middle of the Covid pandemic because we worked like a family. That was the passion and love everyone had for the film. I gave my hundred percent to this film.

What was most challenging about this film?

Satramm Ramani: It was challenging to shoot in London because of the weather and Covid-induced restrictions. Covid has changed a lot of things when it comes to shooting. We were only allowed a small unit, so everyone was multitasking.

And what was the most memorable moment?

Satramm Ramani: The day we finished the shoot. Double XL is a part of us now. Whenever I see a plus-size person, I automatically have respect for him/her. And this was maintained on the sets as well. Everyone had respect for each other. We don’t feel anybody’s pain otherwise, but we felt that pain through this film.