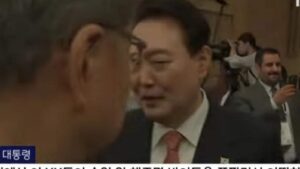 South Korean President Yoon Suk Yeol was overheard insulting American lawmakers after he briefly met US President Joe Biden on Wednesday. In their meeting, the leaders discussed issues including US electric-vehicle subsidies that South Korea wants to change.

“What an embarrassment for Biden, if these idiots refuse to grant it in Congress,” video broadcast on South Korean television showed the South Korean leader telling Foreign Minster Park Jin.

The comments were caught on a microphone as both were leaving a brief chat with Biden.

The off-the-cuff comments from Yoon were met with derision from opposition South Korean lawmakers, who said they tarnished the country’s image.

See also  Boris Johnson’s been stripped of power, but Britain’s PM could be plotting a comeback