Swastika Mukherjee recalled how a fake MMS scandal early in her career made her mother mad at her.

Actor Swastika Mukherjee, who is currently promoting her upcoming film Qala, recently recalled that at the start of her career, she was advised not to reveal that she is a mother. Swastika said that after playing an actor who experiences a career setback after a leaked MMS clip, her parents started getting calls as her relatives assumed that this had actually happened with her.

In a chat with Siddharth Kannan, Swastika said that even though social media was not as invasive at the start of her career, extended family members and neighbours would constantly judge her. She recalled, “I remember I had done one film called Take One which was about a heroine’s life, whose film shoot of an intimate scene gets leaked and becomes an MMS scandal. The film was about that and how she got shunned from work, and how career had a downfall because of the clip that people interpreted in a wrong way. And she became an alcoholic, she went into drugs and she was a single mother in the film.”

Swastika was playing a character on screen but those around her interpreted it as her real life and started calling her parents. She said, “I know my parents started getting calls from relatives and extended family members saying that your daughter drinks since morning and you are not taking care of her enough because that’s the role they saw. My mother, after a week or 10 days, got so mad and angry, she said, ‘Why can’t you do films that come with a U certificate? Just do something for kids, do children’s movies. Why do you have to do roles of alcoholics?’”

Swastika recalled that at the age of 21, she was told to hide the fact that she was a mother because people wouldn’t find her ‘desirable.’ “I was advised when I started working that I should not tell people that I am a mother, or that I have a daughter. Because if my audience gets to know that I have a child, I can never become the heroine and become desirable. I was 21,” she said.

In Qala, Swastika stars alongside Triptii Dimri and Babil Khan. Directed by Anvitaa Dutt, the film will be released on Netflix on December 1. 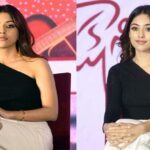