The Defense Minister of Taiwan has stated that airspace violations by Chinese military aircraft will be considered a ‘first strike’ amid heightened tensions. 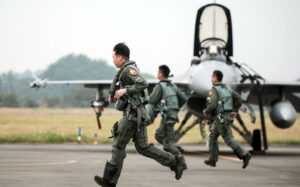 Taiwan’s Ministry of Defense has asserted that any Chinese fighter jets or drones that violate Taiwan’s territorial airspace will be regarded as a “first strike.” Chiu Kuo-cheng, the Defense Minister of Taiwan, made the remarks while addressing lawmakers on the threats posed by Beijing’s recent spate of aggressive measures, which saw Chinese fighter jets and drones fly near the self-governing island nation, even intruding into Taiwan’s airspace, reported CNN. The Taiwanese Defense Minister established on Wednesday, that the island nation seeks to step up its defences in response to China’s increasing military pressure in the region.

The Defense Ministry of Taiwan has repeatedly been sharing updates on airspace violations by Chinese aircraft on its official Twitter handle. According to the nation’s perspective, violation of Taiwan’s territorial limit by China, defined as 12 nautical miles (22.2 kilometres) from the shores of the island nation, will now be labelled as a ‘first strike’.

However, during the address, the Taiwanese defence minister did not specify how the country would respond if PLAAF aircraft breached the territorial limit. He, however, mentioned, “In the past, we said we won’t be the first to strike, which meant we will not fire the first shot without (China) firing artillery shells or missiles first,” reported CNN.

Asserting Taiwan’s fresh decision, Chiu said during a meeting of the Legislature’s Foreign and National Defense Committee, “But now the definition has obviously changed.”

Previously, Tsai Ing-Wen, the President of Taiwan had stated that Taiwan’s military would take “necessary and forceful countermeasures as appropriate” against what she called the gray zone of China’s warfare tactics, including “drone harassment.”

“We will not give China the pretext to create conflict. We will not provoke disputes and we will be restrained, yet that does not mean we will not counteract,” Tsai said.

The Taiwanese Defense Minister further stated that the nation’s military “definitely has its red line” when it comes to the defence of the island nation while stressing that the military will launch “countermeasures” once the red line is crossed.

Meanwhile, following the visit of US House of Representative Speaker Nancy Pelosi in early August, tensions between Beijing and Taipei are at their highest, with the Chinese military holding major military drills near the island.

The military drills in August were largely perceived as a rehearsal for a potential blockade of the island. Chinese leader Xi Jinping had earlier in the year, stated that “reunification” between China and Taiwan is inevitable and refused to rule out the use of force.