A team of investigators stated that police at Indonesia’s football stadium on October 1 used tear gas indiscriminately, which contributed to the stampede 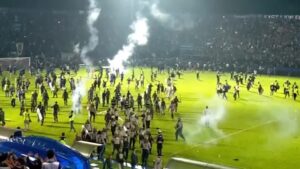 In the aftermath of the tragic incident during a football game in Indonesia on October 1, a team of investigators on Friday stated that police at the football stadium used tear gas indiscriminately, which contributed to the stampede that killed 132 people. According to a Benar News report, police had previously blamed the tragedy on other circumstances, such as the narrow stadium exits. However, the fact-finding team said that when nearly 3,000 angry people flooded the pitch at Kanjuruhan Stadium in Malang following the home team’s defeat to arch-rivals, officials sprayed tear gas at them arbitrarily.

Mohammad Mahfud MD, chairman of the team and the Coordinating Minister for Political, Legal, and Security Affairs of Indonesia, said, “The deaths and injuries were the result of the stampede after tear gas was fired,” as per the report.

According to the report, police “fired tear gas in an arbitrary manner at the pitch, the stands and outside the stadium”. It further recommended that everyone involved, including the ‘excessive’ behavior of the police and soldiers and the stadium administration’s failure to make sure all gates were open following the game, will be investigated.

The fact-finding team’s report also noted, “There is no synchronization between FIFA Stadium Safety and Security Regulations and the national police chief’s guidelines in handling football matches”.

In addition to this, the President of Indonesia, Joko Widodo formed the team, which consists of football specialists, academics, activists, and journalists, in response to public outrage over the tragedy.

6 people were charged for the Indonesia soccer stampede

Following a league match between the home team Arema FC and the rival East Java club Persebaya Surabaya, security forces used tear gas to scatter supporters who had intruded onto the playing surface. The estimated 40,000 fans scrambled to the exit gates amid the smoke from the tear gas, which started the stampede.

In addition to this, after the fatal incident, six persons, including police and event organisers, are currently facing criminal charges. The catastrophe that occurred on October 1 in the East Javan city of Malang is thought to be one of the worst sporting mishaps ever, according to the Associated Press report.

Police chief Listyo Sigit Prabowo stated during a news conference that the football league administrator, who was responsible for ensuring that stadiums have proper operating certificates, is one of the suspects. The stadium in Malang City, he added, did not follow certification norms and had not passed a complete verification.

Sigit said that in addition to the administrator, charges have been brought against the head of the organising committee, the chief of security for the host team, Arema FC, and three police officers who fired tear gas. If found guilty of the charge of criminal negligence causing death, the suspects may get a maximum prison sentence of five years, the report added.