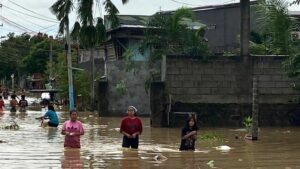 Five rescue workers in the Philippines have been killed in a typhoon that has left homes flooded and millions without electricity.

They were washed away in flash floods while carrying out operations in the district of San Miguel, north of the capital Manila.

The district was among those hit hard by Typhoon Noru, with some residents seen stranded on their roofs, while others waded through chest-high garbage strewn waters, attempting to pass on supplies.

The typhoon caused gusts of up to 240kph (149mph) on Luzon, where more than half of the country’s 110 million population live.

Noru, known locally as Karding, first made landfall as a super typhoon, but later weakened at 20:20 local time (12:20 GMT) on Sunday. It is expected to leave the Philippines by Monday evening.

In San Vincente, a village in San Miguel, one man was seen futilely trying to brush water away from his door.

Another, standing on top of the rooftop of her home, shouted that the country’s leaders needed to “focus on climate change”.

Floods in the village peaked at around 04:00 in the morning, and waters are said to be receding.

More than 74,000 people had been evacuated from the typhoon’s path, and officials had earlier issued warnings of “serious flooding” in areas of the capital, Manila.

But so far there have been no reports of severe damage or widespread loss of life.

“I think we may have gotten lucky, at least this time,” said Philippines president Ferdinand Marcos during a briefing on Monday. “I think it’s clear from what we did these last two days is that, very, very important, is preparation,” he added.

“It’s not yet over. I think the point when we can stand down is when the majority of evacuees are already back in their homes,” he said.

Mr Marcos has ordered that supplies be airlifted and clean-up equipment provided to communities that have been most affected. 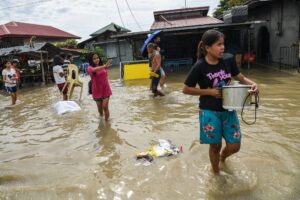 In Quezon Province, east of Manila, fishermen had earlier been prevented from heading to sea, and there were reports of some areas being without power.

Flights and ferry services have been cancelled. On Luzon, President Marcos suspended all government work and school classes were also cancelled.

In Dingalan municipality, northeast of Manila and on the Pacific coast, residents were forced to seek shelter.

Trading on the country’s stock exchange will also be suspended on Monday and Mr Marcos warned that the energy ministry had placed on high alert all energy-related industries in the county.

Thousands of volunteers are monitoring river levels, bridges and mountains for landslides which could hamper rescue efforts, said Dick Gordon, chairman of the Philippine Red Cross.

Information will be crucial in getting help to where it is needed, he said.

The Philippines, an archipelago of more than 7,000 islands in the Pacific Ocean, is highly vulnerable to storms. It sees an annual average of 20 tropical storms.

An estimated 400 people died when Typhoon Rai hit the country in December 2021, with rescue teams describing scenes of “complete carnage”.

And in 2013, Typhoon Haiyan, one of the most powerful tropical storms ever recorded, killed some 6,300 people.