UK Home Secretary Suella Braverman has met with local police officers and Hindu and Muslim community leaders in Leicester and assured them that thugs behind recent violent clashes would face the full force of the law. 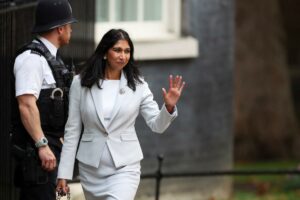 UK Home Secretary Suella Braverman has met with local police officers and Hindu and Muslim community leaders in Leicester and assured them that thugs behind recent violent clashes would face the full force of the law.

During a visit to the eastern England city on Thursday, the Indian-origin Cabinet minister was briefed by the Leicestershire Police chief and also leaders from local temples and mosques on the “serious disorder” which has resulted in 47 arrests. The disorder came as tensions since an India-Pakistan cricket match at the end of last month continued to spill over into this weekend.

“I met with Leicestershire Police officers, the Temporary Chief Constable for Leicestershire and local community leaders to discuss action being taken to protect local residents and restore safety and harmony in Leicester,” Braverman tweeted after her visit.

“We’ll work together on this, and I will do everything I can to support communities and our police. Those who bring disorder and thuggery to our streets will face the full force of the law and I thank all those brave police officers for keeping us safe,” she said.

With reference to reports of a protest by masked men outside a temple in Birmingham earlier this week, the Home Secretary said she had also spoken to the local West Midlands Police chief and that the situation there continues to be monitored.

“I also spoke to Dave Thompson, Chief Constable of West Midlands Police today. I continue to monitor the situation and thank the police for their expert handling,” she said.

Her intervention follows several appeals from within the local community and parliamentarians to take action against extremist elements behind the clashes.

“These targeted attacks were by Islamist extremists and have understandably generated a vast amount of fear, harm and disruption to the wider Hindu community across the UK,” said Bob Blackman, Conservative Party MP Chair of the All Paty Parliamentary Group (APPG) of British Hindus, in his letter to Braverman.

Lord Dolar Popat, also from the APPG of British Hindus, called on the minister to engage with the group in order to de-escalate matters.

“Let us not let a minority of people destroy the progress we have made and that have chosen to attack not only Hindu values but British values of being inclusive and championing religious freedom,” his letter reads.

Earlier, the Indian High Commission in London had strongly condemned the “violence perpetrated against the Indian community in Leicester and vandalisation of premises and symbols of Hindu religion”.

Meanwhile, Leicester City Mayor Peter Soulsby has indicated plans for an independent review into the circumstances behind the weekend’s violence.

“My intention is to have a review of what led up to the events at the weekend, and also to seek some independent thoughts on how we all – council, police and communities – can learn from this, and what we can do at a local level to ensure it doesn’t happen again,” Soulsby told the BBC.

It comes as the Leicestershire Police continues to issue appeals for calm and also reassure the community amid preparations for Hindu festivals coming up.

“We are encouraging people to prepare for Navratri and Diwali as normal. A visible and strengthened police presence will be there for all communities,” the force said in a statement.