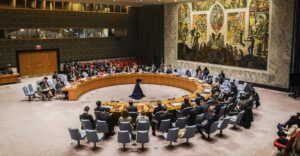 The United States said on Wednesday that Russia and China are currently enabling the leader of North Korea – Kim Jong Un – by stopping the United Nations Security Council from imposing sanctions on Pyongyang for the multiple nuclear weapon and ballistic missile tests.

“The DPRK (North Korea) has enjoyed blanket protection from two members of this council,” U.S. Ambassador to the United Nations, Linda Thomas-Greenfield, said according to Reuters.

In the last week, North Korea has tested multiple intermediate-range ballistic missiles following the military drills conducted by South Korea and the US. A missile was launched over Japan as well just few days after US Vice President Kamala Harris visited Seoul on a diplomatic tour.

The security council met on Wednesday to discuss the missile tests and although China and Russia wanted to keep the discussions private, the United States, Britain, France, Albania, Brazil, India, Ireland, Norway and United Arab Emirates all condemned North Korea in an official statement.

China said that they need to continue proper discussions in order to control the situation.

“Discussions and deliberations should contribute to a detente, rather than fuelling escalation. They should promote the resumption of dialogue instead of widening differences and forge unity instead of creating divisions,” China’s deputy U.N. ambassador, Geng Shuang, said.

Russia’s deputy U.N. ambassador, Anna Evstigneeva, also said that the sanctions are not the way to go with North Korea and they will need to come up with a more effective solution.

“We are convinced that the U.N. and Security Council mechanisms need to be used to support the inter-Korean dialogue and multilateral negotiations rather than becoming an impediment to them.”