Vikram Vedha movie review: After a long time, two top-flight stars such as Hrithik Roshan and Saif Ali Khan sink their teeth into a proper story which comes before them. 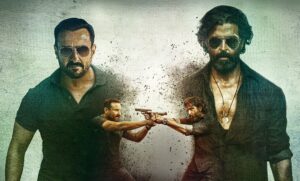 I must confess that I was deeply apprehensive when I heard that ‘Vikram Vedha’ was to be remade in Hindi, even if the helmers were going to be the same. The 2017 Tamil-language cop-and-robber movie, written and directed by Pushkar-Gayatri, was a trip: I enjoyed every bit of it. R Madhavan as the cop was solid, and Vijay Sethupathi, as the gangster blew me away. This was the work of people who were clearly skilled at not just creating images, but who also managed to infuse feelings into those images. It had a crisp pace, the undercurrent of humour, the smart plotting which made light of its density, and all of it overlaid by that zippy theme tune, ‘Vikram Vedha’ was a cracking good time at the movies.

The near-faithful Hindi remake isn’t half bad, even if it isn’t as good as the original. In Tamil, not just the initial animation strip, about the myth of Vikram and Betaal from ‘Betaal Pachchisi’, is more fleshed out, the characters feel more grounded, and the supporting actors get a little more to do. Most importantly, the lead duo has more swag than swagger, and that makes all the difference. In Bollywood, looks matter — Saif Ali Khan’s cop’s beefed-up bulk is drawn more attention to than R Madhavan’s large build, even though they are given similar smart-alecky lines; and Hrithik’s near-dreadlocks are more artfully teased out than Sethupathi’s straight-up grey stubble.

But after some time of wrapping their tongues around Kanpur-Lucknow Hindi dialects (of course, such phrases as ‘baudam’, budbak, ‘chaukas’, and ‘bauraa gaye ho ka’ are strewn about, calling attention to not just themselves but the actors who are made to say them) and settling into their roles, both Saif and Hrithik begin to enjoy themselves. Both are great choices. And we get, after a long time, two top-flight stars sinking their teeth into a proper story which comes before them, which they have to insert themselves into, not the other way round. Hindi cinema has forgotten how to do this, and it’s taken ‘outsiders’ like Pushkar-Gayatri, whose web series ‘Suzhal’ has been one of the best offerings on the web this year, to show them the way.

Even in the original, a few things were a stretch. The cop’s wife being a lawyer to the ungodly was a nice touch, but her dance-a-deux with the devil wasn’t as believable. Here Radhika Apte reprises Shraddha Srinath’s role, doing a nice job of the ‘vakeel’ who plays footsie with her cop spouse. The supporting actors — Vikram’s colleague and good friend Abbas (Mishra), Vedha’s younger brother Shatak (Saraf) and his dear friend Chanda (Bihani) — are all in service to the two main leads. Despite this, Sharib Hashmi as Vedha’s right-hand-man with a grouse, stands out, just the way a good actor always does.

Smart, well-crafted thrillers don’t have to have emotional high points, but when they do, they become more impactful. Both Saif and Hrithik get a couple of those moments when they are not just filling out their parts of cop and criminal, when they not just exchanging snappy dialogues (‘ek kahaani sunenge, sir’ says Vedha to Vikram, and they are off and away) but getting a measure of each other, and those show us the actors they are, and can be, given a chance.

Everything is going swimmingly, and then, stop press, along comes the item number. Is it a case of have Hrithik, get him to dance? The Alcoholia number is kinetic, and Hrithik still has the most elastic moves, but it slows everything down. Also, at one point, the alert viewer will notice Vedha dropping his rustic accent: all along it has been ‘Satak’ for ‘Shatak’, and then he slips up that once; Vikram places one hand almost balletically on his waist, as he takes aim with the other, and I was instantly diverted. Thankfully, the climatic stand-off is as much a whoa moment as it was the first-time round, and everything ends with a bang. If you haven’t seen the original, you will have more fun with the Hindi version than carping critics, but I do suggest pulling out the original and observing the difference for yourself.

Finally, of course, it is the story which is the biggest star. For a movie full of bristling guns and bloody limbs, ‘Vikram Vedha’ underpins its stylish murder and mayhem with a philosophical question which has no easy answer: is a trigger-happy cop a better man than the criminal who has killed as many men? Who is morally superior? What is right and what is wrong?

I hope this collaboration of North and South is not just a flash in the pan, because if there’s anything that can save Bollywood right now, it is this confluence of talents streaming in from across the Vindhyas. Pushkar-Gayatri are passionate story-tellers who clearly love what they do: can’t wait for their next.