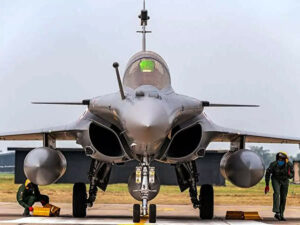 Mille met with Chaudhari at the IAF headquarters in New Delhi on Monday. The visit by Mile came amid an 18-day military exercise between the Indian and French air forces in Jodhpur.

Speaking at Jodhpur, Chaudhari said India has learnt how to carry forward its interoperability. “The French Air Force also flies Rafale, we also fly Rafale, but we fly many other aircraft along with Rafale. It’s important to learn how to interoperate with friendly nations,” ANI quoted the IAF chief as saying.

On Saturday, the IAF said the two air chiefs discussed ways and means to enhance the bilateral ties.

See also  Defiant Taiwan's Identity Is Moving Away From China

It is learnt that the overall situation in the Indo-Pacific as well as the Indian Ocean Region figured in the talks between Chaudhari and Mille.

The ‘Garuda VII’ exercise, involving a significant number of combat jets such as Rafale, Tejas, Jaguar and Sukhoi-30s, began on October 26 and will culminate on November 12.

“Garuda is one exercise that gives us this opportunity which exposes our pilots and crew to the best packages of the French Air and Space Force (FASF) and vice versa,” the IAF chief said.

Mille said, “We are here to fly together with Indian aircrew. Sometimes, with a simple act, we can do a lot. Doing this exercise, we are able to understand each other during the flight. It’s very important to be able to fly and operate together.”

Vice Chief of Naval Staff Vice Admiral SN Ghormade also interacted with Mille with a focus on bilateral operational engagement and mitigation of security concerns in the Indian Ocean region, according to the Indian Navy.

The military cooperation between India and France has witnessed a major expansion in the last few years.