At the Davos summit in 2018, Shah Rukh Khan fielded some hard questions about the portrayal of women in his films, and the treatment of women in the Hindi film industry. 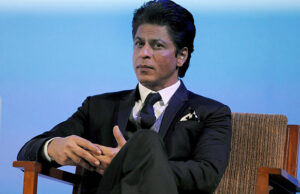 Actor Shah Rukh Khan attended the World Economic Forum summit in Davos in 2018, and spoke with the BBC’s Zeinab Badawi about the responsibilities that come with being a public figure. He admitted that he hasn’t used his voice enough to champion the oppressed, and also answered some questions about the portrayal of women in his films.

Asked if he has witnessed inappropriate behaviour against women at the workplace, or if some of his female co-stars have confided in him about being treated poorly, Shah Rukh said, “Personally, when I’m working in films or making films, we are very clear about the attitude to women. Even the smallest aspects, like their names coming in the titles first, which is not going to do anything, but the kind of respectability…”

But he was cut off. Badawi said that this is merely an ’empty gesture’, and Shah Rukh agreed. He said with a smile, “It is, you don’t have to push me too far to agree with you on this. But it’s a way of trying to say that even this small thing needs to be done, just to bring about equality. See what we’ve reduced ourselves to. We put a girl’s name in front of ours just to show what guys we are, thinking of them as equals. And that is sad, and that is strangely dichotomous when you’re talking about creativity.” He continued, “Nobody dare misbehave with a woman on my set.”

See also  Will The Crown Make The Young Dislike The Monarchy?

He said that he has utmost respect for women, and that probably stems from the fact that he has been surrounded by women all his life. But Badawi interjected, “You say that, but you’ve starred in so many romantic films. And to put it frankly, the women’s characters revolve around yours…” She also asked him if he’s ‘comfortable’ with championing women’s causes and yet, allowing his films to reduce women to ‘scantily clad’ props. Shah Rukh disagreed, and said that in his films, his character’s life revolves around the women and not the other way around.

He asked her to cite examples of films in which the female characters have ‘gained salvation’ after marrying his character. And she cited data from a research paper that said that women in Bollywood films are required to be demure in order to be ‘ideal’, and any woman who protests against authority is considered ‘bad’.

“I don’t do typical Hindi films,” Shah Rukh said, and added, “The portrayal of women needs to change, in every aspect, not only in Hindi films. And one tries to, through one’s work… But yes, it exists, there’s no denying it…”

Shah Rukh will be seen in three films next year — Pathaan, Jawan, and Dunki. He last appeared in a cameo in Brahmastra.