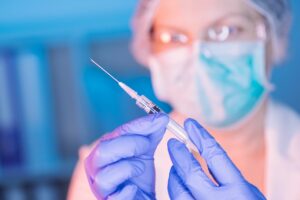 The world is experiencing the highest number of cholera outbreaks in recorded history alongside an acute vaccine shortage. Why?

The world is currently experiencing a shortage of vaccines for cholera, a diarrheal disease that can be fatal within hours if left untreated. The shortage comes at a time when cases are surging at unprecedented rates across the developing world.

Cholera is a waterborne illness — it is spread through water — and kills up to 120,000 people per year. It almost exclusively affects poor countries that lack proper plumbing and water sanitation. It has been largely eradicated from rich countries with functioning sanitation systems.

The illness is characterized by watery diarrhea that looks like “rice water”. After a person has ingested food or water contaminated with the Vibrio cholerae bacterium, it can take anywhere between 12 hours and five days to show symptoms. Many people remain asymptomatic — they don’t experience the most common symptoms.

Serious cases of cholera can be treated with intravenous fluids and antibiotics. If these medicines are unavailable, cholera can turn deadly. And right now, there is a worldwide shortage of cholera vaccine.

Why is there a shortage of cholera vaccines?

The World Health Organization (WHO) announced plans in October to temporarily offer only a single dose of a cholera vaccine, instead of a standard two-dose regimen and said it was because of global vaccine shortages.

These shortages are not necessarily happening solely in response to the global surge in cholera cases, experts say.

Rather, they say, the shortage is likely also due to global vaccine manufacturers’ collective lack of interest in producing and distributing cholera vaccines.

“Cholera vaccines have never been a priority for manufacturers and in many cases governments have not engaged as acknowledging cholera can have implications for commerce,” said Gordon Dougan, a professor in the department of medicine at the University of Cambridge and a member of the board of management at the Wellcome Sanger Institute in the United Kingdom.

“The oral cholera vaccine is cheap and requires bulk sales to generate profit, something off the agenda for most companies in higher income countries,” Dougan said.

Shantha Biotechnics, an Indian subsidiary of France’s Sanofi, has historically produced around 15% of the world’s supply of the oral cholera vaccine Shanchol.

There is only one other company that produces cholera vaccines, EuBiologics, based in South Korea. They are looking to increase production in the coming years, but the process will take time, said Daniela Garone, a Médecins Sans Frontières (MSF; Doctors Without Borders) international medical coordinator.

Other companies, such as Delhi-based Hilleman Labs’ and Hyderabad-based Bharat Biotech, are collaborating to produce and distribute a cholera vaccine.

This is good, said Garone, but not a quick fix. Garone said that the processes required to produce and distribute new cholera vaccines will take around 4-5 years.

Will the lower dosage offer any protection?

The lowered dosage of the cholera vaccine is a temporary solution and “not ideal,” Garone said.

“We know a two-dose schedule protects individuals longer,” she said.

Generally, the two-dose regimen is said to create immunity against infection for at least three years. Researchers say they know little about the length of immunity from a single dose. The WHO says that some studies, though limited in their scope, have suggested that a single dose gives lower protection to children.

A 2016 paper from Bangladesh provides some evidence that a single dose of Shanchol vaccine offers protection. But more research is needed, said Dougan.

“We will need to accumulate more data on the duration of that protection or how it impacts transmission of diseases compared to two doses,” he said.

Why are so many countries seeing cholera outbreaks?

There are 29 active cholera outbreaks in the world. It is “the highest number on record,” according to the WHO. This includes outbreaks in places that haven’t seen cases of the disease in decades, such as Lebanon and Syria.

Garone said the outbreak in Lebanon, where the WHO has reported over 1,400 suspected cases and 17 deaths, is likely due to human migration from areas where cholera outbreaks already existed.

Outbreaks generally occur in the most vulnerable places in the world — areas experiencing excessive flooding or where refugee settlements lack proper sanitation and water supply, she said.

Yemen, for instance, is considered to be in the midst of one of the worst humanitarian crises in the world, caused by an ongoing conflict. It has been experiencing an acute cholera outbreak since 2016, which has resulted in over 2.5 million cases and over 4,000 deaths.

See also  The ‘Normal’ Blood Pressure Range Is Lower For Women Than For Men: Research

Dougan said Yemen’s cholera outbreak was probably due to water storage problems rather than flooding.

Without vaccines, global health organizations such as MSF say it is impossible for them to follow through with preventative plans to defeat cholera.

In 2017, a global strategy to control the disease was launched by the WHO’s Global Task Force on Cholera Control (GTFCC). Called “Ending Cholera: A global roadmap to 2030”, its goal was to reduce cholera deaths by 90%.

Cholera won’t be solved solely by vaccines — better sanitation is also a vital component, because the illness is spread through water. But vaccines do play an important role in warding off outbreaks.

“If you don’t have enough production, you cannot go through with preventive programs in full,” said Garone.

Dougan added that the role of the WHO in controlling global outbreaks and increasing vaccine stockpiles is “critical.”