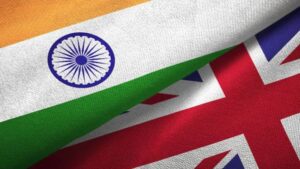 India and Britain launched negotiations for the FTA in January with an aim to conclude talks by Diwali but the deadline was missed due to a lack of consensus on issues.

Describing India as an “economic superpower”, Britain said on Wednesday that it was working towards the “best” Free Trade Agreement (FTA) that is beneficial to both the countries.

India and Britain launched negotiations for the FTA in January with an aim to conclude talks by Diwali but the deadline was missed due to a lack of consensus on issues.

“We have already closed the majority of Chapters and look forward to the next round of talks shortly,” Secretary of State for International Trade Greg Hands said while replying to a question from Nick Thomas-Symonds, Shadow international trade secretary.

A “strong FTA can strengthen the economic links between UK and India, boosting the UK economy by more than 3 billion pounds by 2035, helping families and communities,” he said.

He said that the FTA can cut red tapes, make it cheaper for UK companies to sell into India’s dynamic market , helping drive growth and support jobs across every nation and region.

Greater access could help UK businesses over a billion more consumers including India’s growing middle class estimated to reach a quarter of a billion by year 2050 and give them a competitive edge over other countries that don’t have a deal with India.

An FTA with India that supports the Government growth strategy by taking advantage of the UK’s status as an independent trading nation, championing free trade that benefits the whole of the UK, he said.

“We remain clear that we are working towards the best deal that is beneficial to both sides and won’t sign until we have a deal that is fair, reciprocal and ultimately in the best interest of UK people and UK economy,” he said.

At the outset, he said India is of course an “economic superpower” projected to be the world’s third largest economic power by 2050.

“To improve access to this dynamic market, a huge opportunity for UK businesses, building on a trading relationship worth more than 24 billion pounds in 2021. That is why we are negotiating a trade agreement that works for both the countries,” he added.

Symonds also asked Hands to agree home secretary Suella Braverman has “completely undermined the UK government’s negotiations” and asked whether she will withdraw those comments – and whether a future target date for the deal has been agreed.

Hands responded by saying the majority of the chapters on the deal – 16 chapters across 26 policy areas – have been agreed so far.

On Braverman’s visa comments, he said she was referring to mode 4 arrangements, which relate to business visas not for permanent settlement. “That remains an area of active negotiation”, he added.

The India-UK free trade deal, which has missed the Diwali deadline, is likely to get the much-needed impetus with Rishi Sunak taking over as Britain’s first Indian-origin Prime Minister as experts see political stability in the UK giving momentum to negotiations.

Sunak, in his previous role as Chancellor of the Exchequer, had expressed support for the FTA as he saw enormous opportunities for both countries in the fintech and insurance sectors.

According to the experts, political stability in the UK now would help fast-track the negotiations for the pact, which could potentially double bilateral trade by 2030.

India has in recent times signed trade deals with the United Arab Emirates and Australia but talks with the UK had hit a snag over easier access to Indian skilled workers.

New Delhi is also seeking to claw back payments made by Indian workers towards Britain’s social security system as part of the deal.

In a free trade agreement, two countries either eliminate or significantly reduce customs duties on the maximum number of goods traded between them, besides easing norms for promoting investments and services trade.