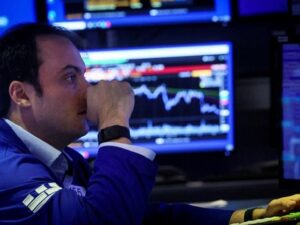 World stocks were a touch softer on Wednesday with sentiment caught between upbeat earnings and further signs that strong inflation will keep major central banks firmly in rate-hiking mode.

Europe’s broad STOXX 600 index slipped 0.3%. In London, banks such as LLoyds and NatWest tumbled on a report that Britain’s new finance minister was planning to raid bank profits.

Data meanwhile showed soaring food prices pushed British inflation back to a 40-year high at 10.1%, piling pressure on the Bank of England to hike rates again. The Federal Reserve may need to push its key rate above 4.75% if underlying inflation does not stop rising, Minneapolis Federal Reserve Bank President Neel Kashkari said late on Tuesday.

Still, Wall Street shares were tipped to open higher with Netflix shares soaring 14% in after-hours trade on Tuesday after the streaming giant reversed customer losses that had hammered its stock this year and projected more growth ahead.

Upbeat results this week from the likes of Goldman Sachs, Bank of America and Johnson & Johnson have eased worries about a weak earnings season hit by rising borrowing costs and high inflation.

The S&P 500 stock index is up more than 6% from roughly two-year lows hit last week.

“What is reassuring is that in an environment which has been very difficult for equity markets over the past few weeks, is that you have (earnings) numbers that are turning out positive,” said Francois Savary, chief investment officer at Prime Partners.

“Is it going to last? We need to focus on the guidance and also we are still living with this interest rate environment that is very volatile and that means it’s difficult to see the market pushing higher.”

In Asia, Japan’s Nikkei rose around 0.4% but MSCI’s broadest index of Asia-Pacific shares outside Japan reversed early gains and fell more than 1%, driven by a drop in Chinese shares.

All this left MSCI’s World Stock Index about a quarter of a percent softer on the day.

The dollar held at a 32-year peak against the yen and rose from a two-week trough against a basket of major peers, underpinned by expectations of aggressive U.S. Federal Reserve rate hikes.

Sterling fell around 0.5% to $1.1261 after the British inflation data stoked concerns about the economic outlook.

The BoE said on Tuesday that it would start selling some of its huge stock of British government bonds from Nov. 1, but would not sell any longer-duration gilts this year.

“The government’s fiscal U-turn may have partially eased the pressure on the Bank of England, yet this morning’s inflation data provides another stark reminder of the breadth of inflationary pressures in the economy,” said Hugh Gimber, global market strategist at J.P. Morgan Asset Management.

Currency traders meanwhile remained on high alert for Japanese authorities to step into the market again, as the dollar strengthened towards 150 yen. A cross of 145 a month ago spurred the first yen-buying intervention since 1998.

Oil prices fell more than 3% on Tuesday on fears of higher U.S. supply and the economic slowdown in China.

U.S. President Joe Biden will announce a plan on Wednesday to sell off the last portion of his release from the nation’s emergency oil reserve by year’s end, and detail a strategy to refill the stockpile when prices drop, a senior administration official said.