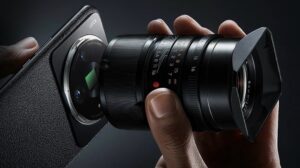 The Xiaomi 12S Ultra Concept lets you attach a professional Leica lens, turning the phone into a full-fledged mirrorless camera. Here’s how it works.

The Xiaomi 12S Ultra Concept was recently unveiled by Xiaomi founder and CEO Lei Jun on Twitter. The concept phone looks a lot like the regular Xiaomi 12S Ultra but comes with room for a modular attachment where you can basically turn the phone into a proper mirrorless camera with a professional Leica lens.

Co-engineered with Leica, the German camera maker, the Xiaomi 12S Ultra comes with two 1-inch camera sensors (that’s twice the number of sensors compared to the regular 12S Ultra), one of which will function as a regular flagship camera while the other will kick in when you add a Leica M-series lens.

When a lens is attached, users will be able to adjust the focal length just as they would be able to on a mirrorless camera, as well as use all of the Xiaomi 12S Ultra’s UI features like a histogram, focus peaking and 10-bit RAW support.

Xiaomi is not the first brand to bring in camera attachments. We have had Motorola and its Hasselblad attachments for the Moto Z series phones, as well as some other implementations by phone-makers. However, these have always been flawed for two main reasons.

The first is proprietary modular attachments. Like the Moto Z-series add-ons, camera attachments for smartphones until today have always been proprietary, which means that these attachments are specifically made for a particular phone, and cannot be used with anything else. If you break your phone, lose it, or simply switch it, the attachments also become pointless.

The second flaw is the design. Smartphones with modular attachments already had a smartphone camera with its own lens – a fixed focal length lens, which meant that even when you added an external lens, the light you’d capture while taking a picture would pass through both lenses. This meant the mechanism would have to lose some of the light, likely affecting the image quality.

None of these factors ends up being a problem with the Xiaomi 12S Ultra Concept. The phone supports Leica M-series mounting lenses, giving users the option to choose from or switch between these lenses. The Lenses will also be usable with a Leica camera when you don’t want to use the phone.

The phone has a second dedicated 1-inch sensor that works only when you attach one of these lenses. This secondary sensor has no fixed focal length lens in front of it (which is why it can only be used with a modular lens) and only has a layer of sapphire glass to protect it from dust and water.

Meanwhile, the phone’s primary sensor remains the same 1-inch one used on the vanilla 12S Ultra, and Xiaomi claims it can deliver the same quality of pictures, which was already one of the best cameras on a phone. Check out our images from Xiaomi 12S Ultra.

Can you get your hands on the Xiaomi 12S Ultra Concept?

Unfortunately, not just yet. The device is a concept phone, similar to other concept phones we have seen from brands like OnePlus in the past. Acting more as a stepping stone for technologies that can be used on mainstream phones in the future, the Xiaomi 12S Ultra Concept will not be available for purchase. However, it leaves a wide path for the future of mobile photography, and perhaps someday, we could see more implementations such as this come to phones that customers can actually buy.